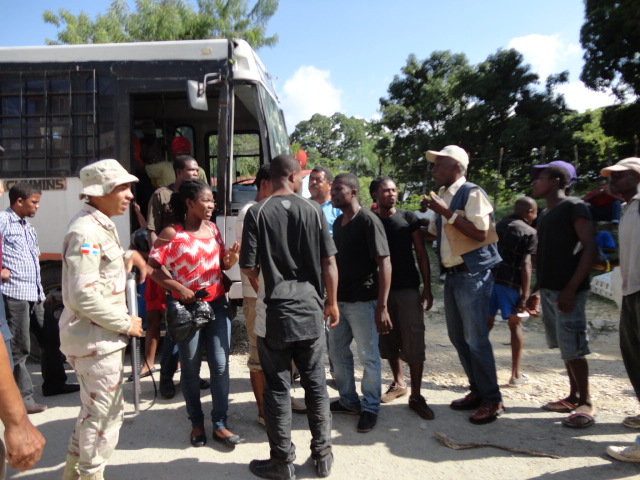 Dominicans of Haitian Descent Forced to Fight for Citizenship

Last month's tragic lynching of a young Haitian man in the Dominican Republic has brought international attention to a national issue: ongoing discrimination and violence against Dominicans of Haitian descent.

The victim was found beaten, bound and hanged from a tree in the centre of the city of Santiago de los Caballeros. The state police deny that racism was a motive, but with no clear investigation underway the incident has further raised bi-national tensions on both sides of the island.

These tensions have been growing for several months now, as migrants and Dominicans of Haitian descent in the Dominican Republic continue to face obstaclesin claiming their right to nationality.

The situation dates back to a Dominican Constitutional Court ruling in September 2013, which retroactively altered the criteria for obtaining nationality for those born between 1929 and 2010 to foreign parents in the Dominican Republic. This ruling rescinded a previous law that gave automatic Dominican citizenship to anyone born in the country.

Some 200,000 people were affected by the 2013 decision, according to a survey by the Dominican National Bureau for Statistics: the majority of them were of Haitian descent. They face an uncertain future and are now at risk of no longer being a citizen of any country, living with the threat of deportation and denied access to education, employment and healthcare.

Local organisations funded by the international development NGO Christian Aid were among the groups that spoke out strongly against the constitutional decision and urged the Dominican government to reverse the ruling.

As a result, the government introduced a new law (169-14) in May 2014, extending citizenship to Dominicans of Haitian descent who were officially registered under the civil registry and who had existing identity papers.

This new law blocks - but cannot overturn - the September 2013 decision. Consequently it fails to restore Dominican nationality to those who previously had it between 1929 and 2010 but who are either not officially registered or don't have the necessary papers.

Those affected by this ruling fall into two groups. The first - Dominicans of Haitian descent with valid identity papers - were ordered to prove and register their Dominican nationality or face deportation to neighbouring Haiti. Although it's just next door, Haiti is likely to be completely alien to them: most have no personal connection with the country and do not speak the language.

Official figures show that less than 10% of those eligible to register their nationality submitted the necessary papers: it's believed that administrative hurdles and high fees prevented many from doing so. Local sources allege that the Central Electoral Board hasn't been validating their papers as it should have done, leaving people with a very real fear of being deported as they walk the streets.

The second group affected by the May 2014 ruling - people without identity papers - were ordered to find documentation by February 1, 2015, to prove they were born in the Dominican Republic.

However, even if they could find hard evidence of their birth and this proof was approved, they would still only be recognised as foreigners, a secondary status, and could only receive Dominican nationality after two years through a naturalisation process.

So what happens now to the tens of thousands of Dominicans of Haitian descent with no papers? The government has said they can enrol in its 'Regularisation Plan for Migrants', which could give them access to some 'legal papers'.

If they don't enrol, they'll stay locked in legal limbo. They'll become stateless, without the benefits of citizenship and forced to live without rights to decent work, education, healthcare or even the ability to register their children.

In the face of this threat, Christian Aid and our partners continue to push for the rights of Dominicans of Haitian descent and are helping them to get access to the proper documentation. (Although the February deadline has passed, if migrants can show evidence of their efforts it could prove useful in future, if human rights groups launch a legal challenge against the Dominican state.)

If the Dominican government begins to implement major deportations to Haiti, we will need to be ready to support the women, men and children displaced to a country where they do not belong. Christian Aid is preparing a number of orientation centres near the Haitian border, and is working with both Dominican and Haitian civil society groups to put together a joint response to this potential humanitarian crisis, should it arise.

Since this situation has fractured relationships here in the Dominican Republic, the context we're working in can be hostile. Some journalists have received death threats after people took offence to how they've reported on this topic, while human rights groups backing fair treatment of Dominicans of Haitian descent are being branded as 'traitors to the country'.

Sadly, Dominican media tends to be sympathetic towards nationalism and right-wing pro-government groups, while society at large broadly seems to accept what is clearly an unjust situation.

That's why Christian Aid and our partners on the ground are raising public awareness of the right to nationality for Dominicans of Haitian descent, particularly among parts of the Dominican population who still do not believe such a human right exists.

With the threat of deportation looming for tens of thousands of people, it is imperative that we act now, before it is too late.