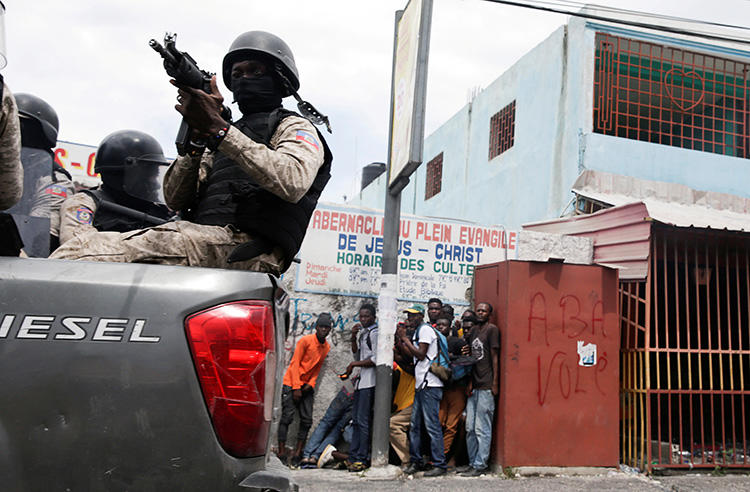 Miami, October 1, 2019 -- Haitian authorities should conduct a prompt and thorough investigation into the shooting of journalist Edmond Agenor Joseph, hold those responsible to account, and ensure the protection of journalists covering protests, the Committee to Protect Journalists said today.

Yesterday, during clashes between protesters and police in Port-au-Prince, a police officer shot Joseph, a cameraman for the privately owned radio station Radio Sans Fin, in the wrist, according to Reuters and Yvenert Fosheter Joseph, the broadcaster’s general manager, who described the incident to local news website Rezo Nodwès. Police fired their weapons in an effort to disperse protesters, and also fired tear gas, according to Reuters.

Fosheter told CPJ by email today that police had fired “real bullets” to disperse protesters and that Edmond Joseph was hit. “For the moment his life is not in danger,” he said. Fosheter also told CPJ that at the time he was shot, Joseph was wearing a large press badge and a protective vest and helmet.

Joseph was taken to a hospital where doctors diagnosed that he had several fractures in his wrist from the bullet, according to Jacques Desrosier, secretary general of the Association of Haitian Journalists, the local journalists’ union, who spoke to CPJ via messaging app. Doctors recommended that Joseph receive surgery, but were understaffed and were unable to conduct the operation yesterday; he is scheduled for surgery today, Desrosier said, adding that Joseph may lose a finger from the injury.

Yvenert Fosheter Joseph told Rezo Nodwès that police officers’ use of live ammunition was “illegal and unconventional,” and said that Radio Sans Fin would file an official complaint against the Haitian National Police.

"The case of Edmond Agenor Joseph, the second journalist shot in Port-au-Prince in less than eight days, highlights the extremely serious risks for journalists today in Haiti," said CPJ South and Central America Program Coordinator Natalie Southwick in New York. "Haitian authorities cannot keep standing idly by while journalists are threatened, shot at, and even killed. They must show they are taking decisive action by investigating and ensuring that those responsible are brought to justice, which they have so far failed to do.”

Violence against the press has been escalating in Haiti, amid anti-government protests and calls for the resignation of President Jovenel Moïse, according to news reports. On September 23, Senator Jean Marie Ralph Féthière fired a pistol into a crowd of demonstrators near the Senate building in Port-au-Prince, hitting Chery Dieu-Nalio, an Associated Press photographer, in the face with a bullet fragment, as CPJ reported at the time.

Also this year in Haiti, one journalist was shot while covering anti-government demonstrations, two journalists survived shooting attempts, and one journalist, Pétion Rospide from Radio Sans Fin, was shot and killed, according to CPJ reporting.